Written by Rad Basta
Updated over a week ago

In addition to switching to Facebook’s new v3.3 API, we’ve also released a nifty feature alongside that. Since a lot of our users have been requesting this, we’ve thought a lot about how to implement it and came up with a pretty functional solution.

First off, let’s cover some of the basics.
In order for this to work, you will have to switch from predefined widgets to custom ones.

After that this will pop-up. 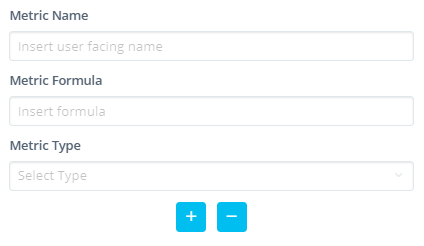 Metric Name: is what your new metric will look like on your widgets. You can leave it blank, but in that case, Reportz will automatically generate a string of numbers/letters so it’s recommended to add one before you proceed.
Metric Formula: this is the most important aspect of Calculated metrics. Here you have to define everything. The metric which you want to calculate as well as what you’d like to calculate it with. You can add multiple metrics or you can go with just one, it’s entirely up to you.
Metric type: is how you want your new values to be presented.
You can choose between:

Since there are a lot of possible combinations for these calculated metrics - I’ll just cover two of the basic ones.
How to show your agency fee in addition to the ad spend. (Markup feature)

Let’s say that we have an agency fee of 15% for the entire ad spend. 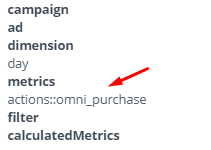 Also, all of the metrics must be included with  {{ as well as }} at the end of the metric.
And here is what the syntax of the markup formula would look like:
{{spend}}*1.15

As a Metric Type, you should choose money because that’s what we want to be shown for this example.

This is what the entire setup should look like before you proceed. 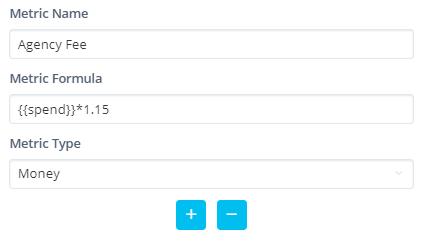 Since you’ve created a Custom Widget you will have to rename it since it’s automatically set to be named Custom. Rename it to something like “Spend / Agency fee”.

We also recommend adding descriptions to your widgets because in the view mode of your dashboards the description will be shown when you hover over the widgets with your pointer.

If you’ve set up the formula the right way the resulting widget should look something like this. 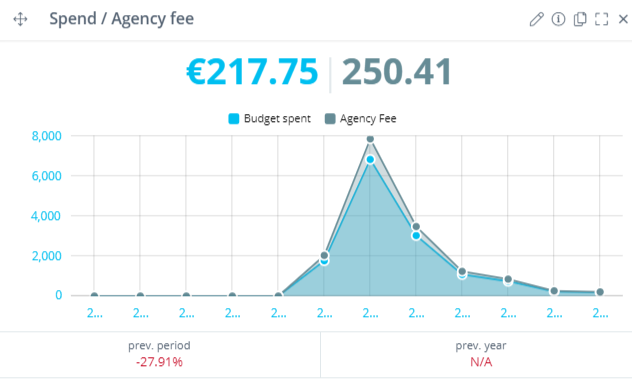 As you can see, the calculated metric is applied to all of the results of the ad spend.

Let’s move on to ROI.

In the Metric Name field insert ROI, or Return on Investment.
For this example, we will calculate ROI for purchases.

In the Metric Formula add this:

So what did we do here? We’ve copied the metric name from the description BUT instead of using the total number of actions we’ve gone with total action values.
What that means is that, instead of the total amount of purchases, we presented how much revenue those purchases generated.
We’ve subtracted that amount with the entire ad spend, divided that number by the entire ad spend and multiplied it with a hundred.

Since ROI is shown in percentages, choose this as your Metric Type.
This is what your setup should look like: 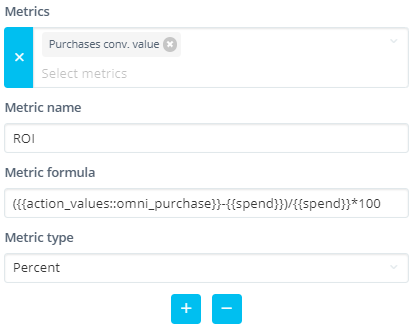 There are a ton of different ways to use these calculated metrics, and we will cover more of them in the days to come.

Don’t forget that the support team is here to help you out with any issue you might have.

Use Reportz now!
Did this answer your question?